Have you ever thought that your life may be the only Bible someone reads? Telling your testimony could kick-start someone’s own journey into faith or encourage them to keep going when they’re struggling. This may be a time when more people than usual are open to talking about faith, so be intentional in your conversations and see what opportunities open up.

Green: To build your confidence, start by sharing testimonies with a Christian friend. Don’t be afraid to practice. You’ll soon get better at it.

Amber: Pray for opportunities to mention how God has answered your prayers with those you are contacting today. Afterwards, offer to pray for them too.

Red: Listen out for cues in your conversations that could lead into sharing how you came to faith. Watch their reactions, and gauge your message accordingly. Know when you’ve said enough or could carry on with more.

‘For God so loved the world that he gave his one and only Son, that whoever believes in him shall not perish but have eternal life.’ (John 3:16 NIV)

My parents emigrated from India in the early 1970s, before I was born. They were practising Sikhs at the time and we went to the Gurdwara on a regular basis.

Growing up, we had an elderly neighbour called Lilly. She was a Christian and became a very dear friend of the family. Lilly’s warmth and friendship were all the more appreciated because of the high racial tensions at the time. She invited our family to a viewing of Jesus Christ Superstar at the local church. Although I didn’t understand everything, like why the main hero died at the end of the movie, I was captivated by Jesus.

When I was 12 years old, my parents went through a very difficult divorce, which was all the more complex and painful because divorce was unheard of within Indian families at that time. My mother, sister and I found ourselves isolated. It was at this time that Mum was befriended by a Christian colleague called Anne. Anne would visit us weekly and pray and read the Bible with my mum as well as helping her with all the practical tasks my dad used to do. Mum eventually became a believer – as did my sister. I, however, was very angry with God and the world.

I had, for many years, been friends with Christians I met through Mum’s church. I was always impressed with how kind they were to our family. I began to suspect that perhaps the joy, love and patience they showed us might be because they were Christian. I was miserable and I wanted what they had. So, I agreed to read John’s Gospel with a friend. I was struck by Jesus’ generosity and warmth to outsiders. We talked about the question that had bothered me since Jesus Christ Superstar – why did Jesus die? The journey to faith took a long time. But, in the end, I got my answers and could offer no more resistance. I was 24 when I became a Christian.

Many years later my dad would ask, ‘Son – if you want to be religious, what’s wrong with your own religion [Sikhism]?’ I replied, ‘It’s not what I want to be true, but what I’m persuaded is true.’

The Christians that God has placed in my life showed me that Jesus was good. Then they showed me that, unlike the comic book heroes I’d grown up with, He was alive and real, and He was desperate for me to know Him.

We all have a story. This is mine. Although, it’s not really my story. It’s Lilly’s story. It’s Anne’s story. It’s a story that belongs to all the Christians who loved me enough to tell me about Jesus. What’s yours? 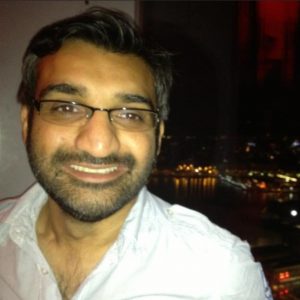 Pod works for Stewardship as Head of Growth. He has a young family, attends Magdalen Road Church in Oxford and is a trustee for speaklife.org.uk.

Universities and Colleges Christian Fellowship (UCCF) is a UK-based charity that aims to advance the evangelical Christian faith amongst students, graduates and former members of universities and to promote biblical scholarship and research.