Human trafficking is modern slavery. Exploiters trick or coerce people (mostly women and children, but it affects men, too) – either under force or by promises of a better life – into working for them. Sexual exploitation is the motivator in 79% of cases, and forced labour in 18% (according to UNODC figures). The secret horrors of this too often hidden crime could be going on in your town. It’s time to open our eyes.

Green: Sign a petition (there’s one at antislavery.org), download the Safe Car Wash app or make a donation to one of the charities working in this area.

Red: Get your church involved by hosting a community car wash to raise some of the issues about modern slavery and fundraise for one of the anti-slavery charities. To support A21’s work to Reach the Vulnerable, Rescue the Victims, and Restore the Survivors, click here.

‘You are the light of the world. A town built on a hill cannot be hidden. Neither do people light a lamp and put it under a bowl. Instead they put it on a stand, and it gives light to everyone in the house. In the same way, let your light shine before others, that they may see your good deeds and glorify your Father in heaven.’ (Matthew 5:14–16 NIV)

My passion to abolish slavery started in 2007 when I saw pictures of missing children at an airport in Greece. The photos hit me on a personal level as one of the missing children had the same name as my daughter: Sophia. After talking with a friend, I could not believe it. I learned that these children were victims of human trafficking and that millions like them were enslaved around the world. Although my husband Nick and I had no experience in fighting human trafficking, we had a deep conviction from God that we had to do something. In 2008, we founded A21 to abolish slavery everywhere, forever.

A21 is a great illustration of what happens when light enters the darkness. Light prevails. After 11 years, A21 is celebrating 1,000 survivors that have come into our care to begin a life of freedom. Brave survivors like Maria*.

Maria managed to escape her traffickers. On the run, the first person Maria encountered had seen an A21 awareness poster. She called the A21 hotline, and the team reached out to the police. Maria was interviewed, and because of her testimony the police were able to conduct a raid where other victims were rescued. Maria entered A21’s aftercare program and received crisis accommodations, medical and psychological support, and life-skills training. Maria has graduated from A21’s aftercare program and is living independently. Today, Maria has a full-time job and is bravely testifying in court against her traffickers so they won’t be able to harm anyone else.

To abolish slavery, we need you. We need Christians to shine a light onto the darkness of modern-day slavery for the glory of God. Although you can’t do everything, everyone can do something. Join us in the fight as the new abolitionists!

*Name has been changed to protect the survivor’s identity 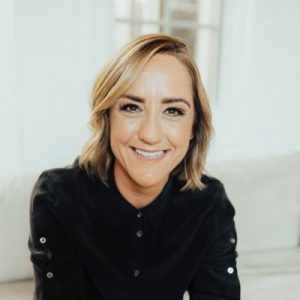 She and her husband, Nick, founded a global anti-human trafficking organisation – A21. They also founded Propel Women, an organisation designed to activate women to fulfil their God-given passion, purpose, and potential.

Christine is the author of several books, including her most recent updated and expanded release Undaunted: Daring to Do What God Calls You to Do.