Our news bulletins are dominated by Coronavirus, but beneath the headlines there are stories of war continuing around the globe. Images of displaced people are commonplace, their buildings in ruins, the rubble-strewn streets carrying tanks and trucks of soldiers. Today is about playing a part, however small, in improving life for those caught up in conflict. This time, when we turn off the TV, it’s to act, not to forget.

Green: Make a point of scrolling down through the news today and praying for the people of the warring countries you read about. Write it down on a Post-it note as a reminder to keep praying.

Amber: Respond to an appeal by making a donation. Look online at organisations such as www.dec.org.uk, www.christianaid.org.uk, and www.redcross.org.uk for details.

Red: There are charities working within the UK among refugees that have fled crisis, who will be among thousands now facing an uncertain future. Search online to find out who is working locally to you and see what you can offer at this time of need.

‘And let us consider how we may spur one another on toward love and good deeds…’ (Hebrews 10:24 NIV)

There was a time not long ago when life was peaceful in Iraq. My friend Su’ad remembers it well. She lived with her daughter and three sons in a town not far from Mosul. She owned a shop, and business was good.

But then ISIS came, bombing her neighbour’s home. Su’ad and her family had no choice but to leave. They loaded what they could into their car and fled. Everything else – all that they had built and invested in over so many years – they left behind.

They joined the great ocean of people displaced by war. Su’ad was reluctant to leave her homeland so sought refuge in a nearby city. Like many they hoped to return home one day, to go back to those times when life was good and peaceful. And while ISIS did not breach the line patrolled by thousands of troops, Su’ad and her family found another enemy waiting for them. Poverty.

She tried to make it work. She tried to rebuild something resembling their old life. But the poverty and lack of opportunity was too great. So eventually Su’ad gave up on the hope of returning home and made one final bid for hope. She and her children fled to Jordan. But poverty was waiting for them there too. Her health started to suffer. One of her sons fell ill. Stress rose and the chance of finding peace and hope appeared to have vanished altogether.

But Su’ad’s story was not set in stone; the ending was not inevitable. Here at Global Hope we have been able to help, meeting her most urgent practical needs by providing food and blankets, heaters for the winter and fans for the summer.

Last year we helped over ten thousand families like Su’ad’s. Thanks to generous people the world over – people like you living in countries like yours – we have been able to offer practical support and see peace returning and hope restored.

The need is great. There are a further five thousand refugee families just like Su’ad’s that are waiting to receive help from us. All the support we receive helps us demonstrate the love of Jesus. It spurs us on toward love and good deeds. 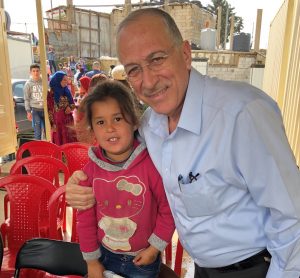 Jamal Hashweh is a Jordanian directing Global Hope Network International’s work in Jordan. Jamal’s experience in humanitarian work dates back to 1991 when Jordan welcomed over one million Iraqi people finding refuge in Jordan.

Since then he has been involved in relief work and has provided help to over 1.5 million Iraqis in Iraq and Jordan and leads projects throughout the Arabic-speaking world.

GHNI works with villagers living in extreme poverty, helping them to self-sustainability with a 5-year Transformational Community Development (TCD) program.