Today, we’re turning our generosity loose on bosses, managers, pastors and head teachers. Our culture doesn’t always bless upwards. But generosity goes all ways. We often only think to focus our generosity on those in dire straits, but when we bless upwards, we discover something that changes us, too.

Green: Thank the boss. Take a moment to start the work day letting them know they’re appreciated by those around them (specifically you).

Amber: Leave them a nice note – and talk to one of their friends and see what kind of gift card you could slip in there too.

Red: Take them out for a meal, bake them a cake, or give them a voucher for a meal.

“So Christ himself gave the apostles, the prophets, the evangelists, the pastors and teachers, to equip his people for works of service, so that the body of Christ may be built up…” (Ephesians 4:11–12 NIV)

When I was a boy, my father was pastor of a small, poor and obscure independent church. We all lived in the manse, a rambling Dickensian wreck and a complete firetrap. The congregation loved my father. They had such affection for him that they decided to give freely and enthusiastically from their limited resources to build a brand-new four-bedroomed house on spare land next to the church.

In doing this, they were demonstrating real love for their pastor and honouring God at the same time. Our neighbours were intrigued. ‘How can such a tiny church afford to build such a nice house?’ they enquired. But build it these lovely people did and it’s still serving God’s work today.

My father had no money. When I started work, I was on the princely sum of £7,000 per year. At 22 I was making more than he did aged 53. Like his congregation, I had huge respect and love for my father. Some years later, when I was established in a very successful career, I asked him if he’d like some money. ‘I’ve got everything I need,’ he told me, although he didn’t own a house and drove an old rust bucket of a car. He instructed me to give the money to mutual friends of ours to whom we used to smuggle Bibles behind the Iron Curtain. These people were persecuted for their faith and often in jail. I did exactly what he told me.

Generosity is about much more than money. It’s about what the Bible calls our heart: our attitudes, desires, and behaviours. We may think of being generous to those who we view as ‘below’ us, such as the poor, but what about those who are placed ‘above’ us, such as our parents, pastors or bosses? Today, let’s be generous with our time, talents and thoughts to all those who are placed ‘above’ us, whoever they may be. 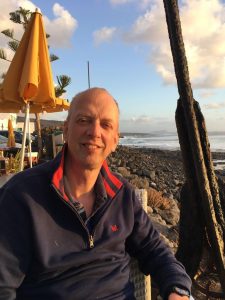 Jeremy Marshall was CEO of the UK’s oldest private bank, C Hoare & Co, until he was forced to retire in 2016 due to incurable cancer. Since then he has been In treatment, mainly chemotherapy. He is chair or trustee of various Christian charities and speaks and writes evangelistically.