If generosity means giving more than we have to give, then forgiveness can be a deeply generous act. We forgive in the same ways that we’re generous: sacrificially, unconditionally, freely. Take a dive into some (maybe) uncomfortable memories: Who might you need to forgive today? What would it take for you to forgive from a generous place? How can God help you with that?

One act today: Read the Easter story in the Bible (Luke 23) and focus on Jesus’ words of forgiveness. Ask God to help you forgive.

“Then Peter came to Jesus and asked, ‘Lord, how many times shall I forgive my brother or sister who sins against me? Up to seven times?’ Jesus answered, ‘I tell you, not seven times, but seventy-seven times.’” (Matthew 18:21–22 NIV)

It was late one Friday night in Liverpool. The three of us were walking home when a man stopped and asked the time. Nothing unusual there. He walked away, then turned, pulled his collar up over his face and lunged towards us, pulling a gun from his pocket. He shouted and waved the gun wildly around. He wanted our money. Being students, we only had about £20 between us. I gave him 69p and a plectrum – it was all I had in my pocket.

I don’t recall feeling scared or angry at the time – I just remember the gunman becoming more and more agitated. Suddenly he jerked to his left, fell backwards slightly and ran off into the darkness, leaving the three of us stunned and silent. As quickly as the robbery took place, it was over. Laughing nervously, we made our way home, trying to make sense of what had just happened.

What I didn’t know then was that the trauma of that night would affect me more than I realised. Though I tried to put the incident behind me, I began to feel fearful. I didn’t like to go out at night. Then I didn’t like to go out at all. I skipped certain lectures. Then I skipped most of my lectures. I started to get panic attacks, long periods of low mood, and dark thoughts. I made silent oaths that I would never let that happen again. No one would treat me like that again – EVER.

I learned to ‘stand up for myself’, shout people down; fear became the fuel for anger and anger would get me out of bed in the morning. Anger was my unwelcome companion. After a while I made allowances for it. I even enjoyed it at times.

Some 18 years later, by now a worship pastor, I found myself squaring up to someone yet again. But this time I knew I needed help. My feelings around the robbery had never left me – they still played on my mind. My friend hit the nail on the head: ‘What does Jesus think about this guy who robbed you?’  My first reaction was, ‘I don’t care what Jesus thinks – the guy’s an idiot!’ Yet I knew I had to forgive him. I just didn’t want to. I didn’t feel like forgiving him, but I knew deep down I had to make that decision.

We prayed, and as we did I saw a picture in my mind’s eye – as if I was looking at the robbery from the outside. I saw the three of us standing with the man pointing the gun at us. I could sense that he was tormented; I could sense the pain he was in. He was afraid. Then I saw that he was flanked by two enormous angels. I instinctively knew that they were there for my protection and were restraining him. As the scene played out and the man became agitated, I saw one of the angels lean down and gently say, ‘That’s enough,’ pressing his left shoulder, causing him to fall backwards slightly. Then he spun round and ran off. I felt an unexpected compassion for him – something I had never felt before, and I felt God say, ‘Your safety was never in question.’

God graciously helped me understand what happened that day. He helped me to forgive, and to put down the anger I had been carrying around all those years. I’m not perfect but I am healed, and it’s from a place of healing that I have seen transformation take place in my life. 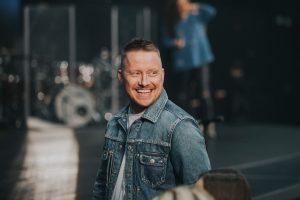 Married to Clare with three children, Matt has been involved in worship leading and church leadership for 20 years. He and Clare have just pioneered a new church plant in Manchester called Kingdom Company