Laughter is the best medicine – it even says so in the Bible (Proverbs 17:22). How often do we see it as a gift to be given? Whether think you’re a comedian or not, share something today that will make someone smile.

One act today: It’s April Fool’s day but forget the mean practical jokes – your aim is to make everyone around you laugh or smile today.

Arthur Ashe said, ‘Start where you are. Use what you have. Do what you can.’ Recently, I was doing a show in the West End. I’d been away from home for months. I came into my dressing room one day to find someone had stuck a Post-it note on my mirror. It was just an encouragement to say that someone cared and had noticed my smile had faded a touch over the past few days. Little did they know I was having a really tough time.

I was struggling with working away from my family and close friends and living on my own in London. That Post-it note lifted me out of the place I was in. I felt I was under a dark cloud and just knowing that someone noticed and wanted me to know made such a difference to my whole week!

The Bible says ‘the world of the generous gets larger and larger’ (Proverbs 11:24 MSG) and it is so true. My wife is one of the most generous people I know. She loves to bless people by picking up the bill at a restaurant, or taking someone flowers if they need cheering up. To make someone smile, there’s no need to spend lots of money.

Mowing the neighbour’s lawn or offering to wash their car could make their day and let them know they’re valued. When I first heard about 40acts, it reminded me of a book by Paul Scanlon called The 15 Revolution. The book challenges its readers to walk out into the world on a daily basis, lift their faces out of their phone screens and see if they’re willing to inconvenience themselves by giving 15 minutes of their time to someone, to make their day.

God lavishes his attention and love on each and every one of us. Today, you can do the same. It’s easy, habit-forming and transformational, and it could change a life. 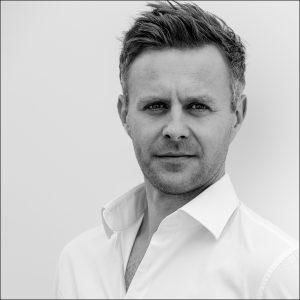 Tom Lister is an actor best known for his role of Carl King on ITVs Emmerdale which he played for 9 years before his demise in the live 40th Anniversary episode in 2012.

Since then he has been performing mainly in the stage in various musicals, most recently he played the lead role  in the West End revival of 42nd Street at Theatre Royal Drury Lane.