Ever feel like you’ve gone through the whole day and missed any chance to be generous? Often, we actually just miss that first step: noticing the people around us. So today, it’s no phone out, no headphones in. Newspapers away. Eyes on the crowd. Notice the person struggling with a heavy bag you might not have seen, the person looking for a seat on the train that you’d miss otherwise.

Green: Watch for needs. Get rid of usual distractions – the paper, or your phone – for the length of your commute, or for a long stretch of time when you’ll be around others.

Amber: At midday and 3pm (or two other times if these don’t work), spend five minutes actively looking for an opportunity to be generous.

Red: Put your phone on airplane mode for 1–2 hours (or as long as is practical). When you go to reach for your phone, let that moment be a prompt to think up a generous act for someone

“Jesus said to him, ‘Receive your sight; your faith has healed you.’ Immediately he received his sight and followed Jesus, praising God. When all the people saw it, they also praised God.” (Luke 18:42–43 NIV)

The woman was flustered – blown in by the wind and a kind of wild energy. ‘Here – here,’ she said, ‘it’s, er, money.’ We had a brief exchange, the door closed behind her. It was almost as if she had never existed. Except the air rippled with her presence and I held the brown envelope she’d given me.

This happened many years ago in a church bookshop in London where I used to work. But it’s stuck with me. Before the woman went, leaving her envelope of four £20 notes with me, she said that she’d ‘come into some money’. She said that she’d once heard someone saying you should give away 10% of what you receive to a good cause. ‘I’m doing it now,’ she said, ‘before I…,’ and then she was gone.

It struck me later that this woman had had an immediate urge to give, perhaps before she changed her mind or forgot. It made me wonder how many times I’d seen someone I could help or thought of something I could do or give, and then let the moment go.

Jesus had it in his power to make the lame walk and to restore the sight of the blind – and that’s just what he did, often in an immediate response to need. Miraculous giving with miraculous results. But, hey, that’s Jesus for you.

See that person wrestling the pushchair up the stairs? Ever been in the queue with someone who’s 50p short on their shopping bill? What about the person in the café who starts to chat with you and makes you feel a bit uncomfortable? Or the person you know whose life would be transformed by something they can’t afford – but you can.

Every day is full of potential mini miracles – and sometimes immediate action is the best way to find out what a mini miracle might turn into. 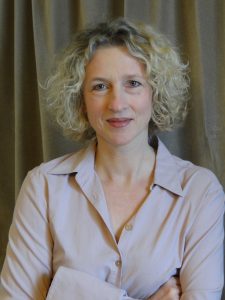 Jackie is a writer who loves hearing people’s stories. She lives in England’s northernmost town, Berwick-upon-Tweed, with her husband, one child who’s yet to fly the nest, and a hen that sits on the nest but doesn’t lay eggs.

She is a community fundraiser for local charity HospiceCare North Northumberland, which is a nurse-led provider of hospice-at-home services, drop-ins, bereavement counselling and patient, carer and family support for those with life-limiting illnesses such as cancer, Parkinson’s, MND and advanced dementia.